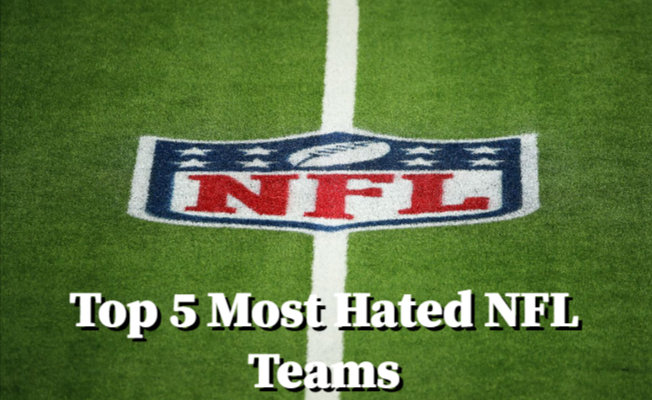 Hatred is a strong feeling that only emerges from the deepest of devotions.

We get it, NFL fans can get a little intense and over-defensive when it comes to their favorite squad and probably the animosity toward their most despised squad.

Formed in 1929, the NFL has seen some of the best squads and individual players. Many of the squads have built their way up to breaking records and despite their accomplishments, they’re still being hated. Of course, not by their fans but by the opponent’s fans.

Needless to say, it is quite normal to have divisional rivalries. I mean it’s unimaginable for any sports team not to have any long-standing kinds of beef between squads that are compelled to play against each other for at least twice a year. However, when we say most hated it doesn’t only have to do with one fan base hating on one squad. Let’s take a look at some of the most hated teams below.

The top 5 most hated NFL teams are:

Topping the list is none other than Dallas Cowboys as the most hated squad in the NFL as per an analysis tracking trash-talking posts on various social media platforms.

This did not come as a surprise to many of us considering how famous the Cowboys have gotten over the years. Nonetheless, the Cowboys are being hated no matter what even when they are winning or losing. Fans of the NFL have a deep passion to hate them due to the very reason they are hailed as “America’s Team.” And also the fact that the Cowboys are one of the best squads in the league makes fans even hate them more.

The New England Patriots are the only team that has enjoyed the longest dominance. The Patriots have played in the Super Bowl eleven times and have managed to 6 five times. Their success only seems to keep on piling up.

Quarterback Tom Brady who was with the Patriots mainly contributed to the team’s accomplishments. He was hated for this very reason and of course his team as well in most of his career because he always won.

Brady and head coach Bill Belichick created the NFL’s most triumphant quarterback–head coach tandem. From 2001-2019, the duo was invariably attributed to the Patriots’ dynasty which led to the dynasty being called the “Brady–Belichick” period after them. The dynasty is considered one of the greatest in sports history. However, Brady has since joined Tampa Bay Buccaneers in 2020.

For many many years, the Pittsburgh Steelers have been widely recognized for their nasty play style on this team because they have the most Super Bowls (six wins tied with the Patriots). The Steelers, considered among the strongest teams have also the nastiest fan base and they’ve defeated every divisional opponent in the playoffs in the past 12 or more years. In 2009, Hines Ward scored the highest number of votes for the dirtiest player in the NFL poll of 296 players, obtaining almost the vote of his closest counterparts including former Steelers Joey Porter who tied in the 2nd spot. This all skyrocketed the amount of hate by fans for the Steelers.

There’s no doubt that the Green Bay Packers have an intense fan base and with Aaron Rodgers the legendary QB on the team, it’s no surprise that the Packers are fourth on our list. When you have the NFL’s best player (Rodgers) on the team, it’s obvious that there will be many people hating you. Not only that but almost every year, the Packers have been a strong contender for the Super Bowl since former QB Brett Favre who is considered the greatest of all time was under center in the 1990s. It’s enough reason for the NFL fans to hate this team.

Miami Dolphins is arguably the only squad in history to proceed undefeated and win the Super Bowl. The Dolphins don’t shy away from saying that they are the best squad and they are certainly right about that. Their best year was probably 1972; where they won their first Super Bowl by defeating the Redskins (now Washington Commanders). However, the Dolphins have not been doing really well since then which resulted in getting a lot of hate from the NFL fans.

The Top 5 Least Popular NFL Teams to know about